The quality of a street is influenced essentially by two time-honoured things and one new one.  Overall, the quality of a street is determined by the quality of its buildings and their forecourts and/or front gardens. Depending on the parking regime, today, parked cars can have a huge influence on how the street appears and is appreciated. Most people have only limited control over the appearance of their house. Good maintenance makes a difference, but with the exception of extensions, the appearance of the house, its style and quality are mostly fixed when it is built.
With front gardens it is different. Less care is often taken with front gardens than with the building itself, even though the garden is really the first point of contact for anyone walking along the street or even arriving by car. The most potent cause of erosion of front gardens is the motor car. Whether because of on-street parking restrictions, charges or due (in the densest streets particularly) to the difficulty of parking near to one’s house, there has been a strong movement in recent years to move the car off the street and on to the front garden. Where the front garden is relatively small the car dominates. What is surprising, however, is the brutal way that the front garden is often treated to accommodate the car. Whether this is down to cost or thoughtlessness is not always clear, but in either case there are solutions which can make a big difference without great expense.

The Bring Fronts Back Gardencheck is a simple way of rating the quality of front gardens, either individually or street by street. It is not intended as a finger-pointing exercise but merely as a way to establish goals for improvement in a street context. The best way to use Garden Check is as an instrument for change and improvement. The Gardencheck might be sponsored and managed by a community group or residents association.

Even where the decision is made to park cars in a way that will potentially dominate a small front garden, there are relatively low cost solutions that can counter the car’s dominance. Some ideas about what can be done to improve a given street scene will be included in the pages linked here.

BFB Gallery: the good, the bad and the ugly 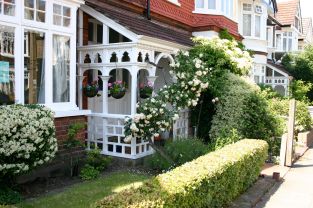 There is a comfort in this slightly shabby brickwork

This low wall and flowering shrubs strikes the right note

A rustic Wall and rockery style plants are homely and comforting 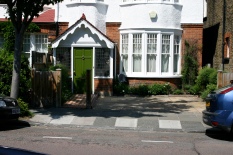 When the car is away the paving can look bleak

The car will only fit in sideways!

Not a plant in sight except in the neighbour’s garden

Seating in the front garden makes it friendly

Selling from your garden can be fun

Lush planting adds a great deal to an ordinary scene